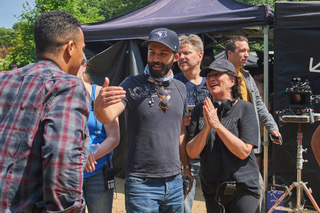 David Cormican is an Emmy®-nominated producer. He is the Co-Founder and President of Don Carmody Television (DCTV) and a member of both the Producers Guild of America (p.g.a.) and the Writers Guild of Canada. DCTV projects include the Rogers-Netflix original series Between, the Emmy®-nominated The Secret Life of Marilyn Monroe for Lifetime, ShadowHunters for Freeform and the International Emmy®-nominated mini-series Tokyo Trial for Netflix and NHK. Tulipani, Love, Honour & A Bicycle, the Dutch-Italian-Canadian co-production and festival darling from two-time Academy Award®-winning director, Mike van Diem, recently premiered at the 2017 Toronto International Film Festival.

Cormican’s most recent career evolution comes not only as the Executive Producer and Producer on, but also as Co-creator, Writer of three episodes, in addition to serving as the series Showrunner on DCTV’s freshman family drama series Northern Rescue for CBC and Netflix.

Selected by Playback as one of the 2015 New Establishment and by The Hollywood Reporter as Next Generation Canada: Class of 2014, Cormican was also recognized by Playback in 2012 as one of the Top 10 to Watch and received the National Screen Institute’s Producer Drama Prize in 2010. In 2016, Cormican received the Distinguished Alumnus Award, MacEwan University’s highest honour, where he was recognized by his Alma Mater for his outstanding achievements in the areas of business, arts and culture, lifelong learning and community service.

Filmmaking accomplishments for this intrepid producer include the Christian Slater thriller Stranded, The Tall Man (Jessica Biel), 13 Eerie and Faces in the Crowd (Milla Jovovich). Cormican founded and ran the Canadian Short Screenplay Competition (CSSC), where he produced five of the winning short film scripts, including Rusted Pyre, which premiered at the 2011 Festival de Cannes and Will, which won the Golden Sheaf for Best Drama at the Yorkton Film Festival.