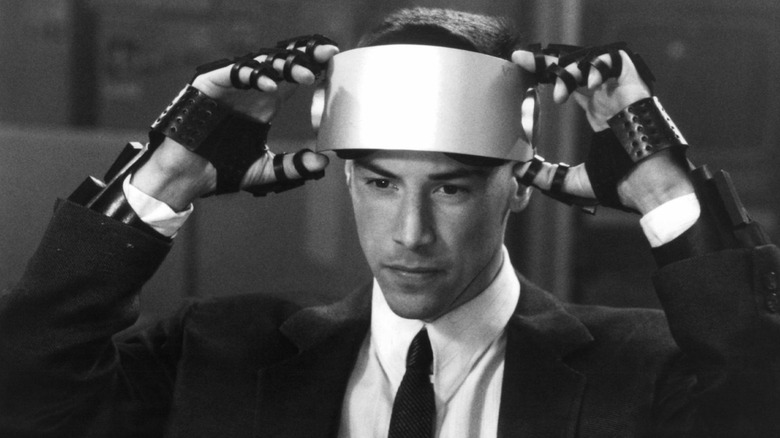 It’s safe to say that “Johnny Mnemonic” has not enjoyed a sterling reputation over the years. Upon its release in the summer of 1995, Roger Ebert damned it with faint praise, calling it “one of the great goofy gestures of recent cinema, a movie that doesn’t deserve one nanosecond of serious analysis but has a kind of idiotic grandeur that makes you almost forgive it.” Time didn’t exactly soften some other critics’ opinions on it, either; Chris Nashawaty wrote in 2019 that the movie has its admirers but “they’re all nuts.”

The one person to bear the brunt of criticism for the film was director Robert Longo. In 2021, Longo reflected to Screen Slate on how “Johnny Mnemonic” affected his life: “I basically got thrown into the garbage heap for a while,” he said. “My career tanked after that, for sure.”

Fortunately for Longo and us long-suffering “Johnny” fans, the film was given a revamp in the form of a meticulously color-timed and restored black-and-white version, “Johnny Mnemonic: In Black and White,” which was released on Blu-Ray and digital this past August. For Longo, the new release redeems his having made what he believes is an inferior version of the movie, and the new version even seems to have others re-evaluating the movie and seeing just how prescient it really was.

By this point in time, the concept of a director’s cut is known to even the most disinterested layman, as numerous home video releases and anniversary restorations have made them commonplace. Even alternate black-and-white cuts of movies that were originally in color have had a moment recently, thanks to films like “Mad Max: Fury Road,” “Logan” and “Parasite” being released with a black-and-white viewing option.

For years, rumors of a director’s cut for “Johnny Mnemonic” persisted, in part because the Japanese theatrical version of the film was edited differently and contained some additional footage different from the US theatrical cut. But Longo made sure to point out that “There’s never been a director’s cut.”

“Johnny Mnemonic: In Black and White” isn’t a different cut of the film from its theatrical release in any way, but its effect is wildly different thanks to the cosmetic change. As Longo explained:

“I always had this fantasy that on the 25th anniversary I would try to get some redemption in relation to this film, because making it was really difficult. And I, at one point, thought about re-editing, but then I realized if I just turned it black-and-white that would be the best, easiest thing to do, and the most radical way of kind of imprinting how I really wanted it, because I wanted to make it in black-and-white originally. I wanted it to be like a contemporary version of ‘Alphaville’ or something like that.”

Robert Longo did not make his name in the filmmaking world; indeed, “Johnny Mnemonic” remains his only full-length feature to date. Instead, he rose to prominence within the art world, making a splash with his “Men in the Cities” series of drawings in the late ’70s. Not coincidentally, these drawings feature men in basic business outfits, clothes that Keanu Reeves’ Johnny wears throughout “Johnny Mnemonic.” As Longo observed, “I always thought it’d be really great to make a movie and steal my own images.”

Combined with screenwriter (and author of the original short story the film was based on) William Gibson, himself one of the architects of the “cyberpunk” subgenre in literature, Longo’s approach to “Johnny Mnemonic” was ambitious, radical, and a little rebellious, something he tapped into when trying to get the black-and-white cut made. Longo shared:

“Originally, when I decided to make this black-and-white conversion, I ripped a Blu-ray and turned it black and white. I contacted one of the film’s original producers who was also a good guy, Don Carmody. I said to him, ‘I’m doing this, and I’m going to dump it on the 25th anniversary. I’m going to dump it on YouTube,’ or something like that. And he said, ‘Wait, let me see it.’ So, I sent it to him, and he got really excited. ‘This is really great. We should show this to Sony.'”

After Sony approved the idea, Longo was given access to “the hi-res footage from the studio” and worked with colorist Cyrus J. Stowe on changing “Johnny Mnemonic” into black-and-white one scene at a time.

One of the issues facing the original theatrical version of “Johnny Mnemonic” lay in its being manipulated by numerous forces behind the scenes. As Longo put it, the movie “had gotten out of control. Keanu had just blown up with ‘Speed.’ Tristar wanted it to be their summer movie. It was kind of crazy.” The change from understated winter release to big summer movie caused the studio to put undue pressures on the first-time film director that included everything from threatening to fire him during production to changing editors on him during post.

While the film is undeniably not action-packed enough to qualify as a summer blockbuster, it has a wealth of compelling concepts and themes, some of which were ahead of their time. Certainly, the movie’s concern with megacorporations controlling potentially life-saving information and the internet as a place where things (and people!) can exist as in a separate reality are elements that we in 2022 take for granted.

The black-and-white release makes the film’s rough edges seem more deliberate than campy mistakes, and Reeves’ performance as a pampered, politically ignorant man increasingly and frustratingly out of his depth plays to the actor’s considerable strengths. For Longo, the black-and-white version is “so much closer to what I imagined it to be,” and its reception seems to be warmer than it has been over the last 27 years:

“It’s kind of great that people are starting to see the movie that was in the movie. […] It took a pandemic to change people’s minds. It took a crazy-ass president. It was all sorts of things.”

The true test of any worthwhile science-fiction is that it both speaks to the time in which it was made as well as carries with it a unique resonance, where its future that never was resembles the present that is. “Johnny Mnemonic” does both. It also features Henry Rollins fighting a whacked-out Dolph Lundgren as a murderous zealot. If you haven’t already, give “Johnny” another look.